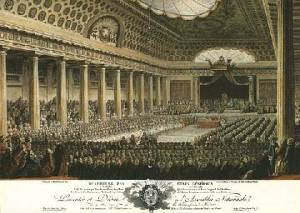 In the lead up to Mark Steel’s Vive la Revolution gig for Southwark Respect on 17th July we will tracking the steps to revolution.

For more information on the gig visit http://www.myspace.com/southlondonrespect

The King, Louis XIV, had called the Estates General together to resolve the country’s financial crisis. The population was represented by the three estates. the First Estate was the clergy, the Second Estate was the nobility, and Third Estate was everyone else (though was dominated by the bourgeoisie). They met seperately.

On 17th June 1789 the Third Estate met and declared itself to be the National Assembly representing the whole of the French people.

The scene was set for confrontation.